Responses from the instrument to the controller are sent as specified in the commands list. Each response is terminated by a <RESPONSE MESSAGE TERMINATOR> which is 0DH (Carriage Return, CR) followed by 0AH (Line Feed, LF).

<WHITE SPACE> is defined as character codes 00H to 20H and is ignored except in command identifiers. e.g. ‘*C LS’ is not equivalent to ‘*CLS’.

The high bit of all characters is ignored. The commands are case insensitive

Error status is maintained using a set of registers as shown below.

The Event Status Register is read and cleared by the ‘*ESR?’ command.

It is a bit field where each bit has the following significance.

There are two Limit Event Status Registers; These are read and cleared using ‘LSR1?’ and ‘LSR2’ respectively. On power up these registers are set to 0 then immediately set to show new limit status.

This register contains a number representing the last error encountered over the current interface. The Execution Error register is read and cleared using the ‘EER?’ command. On power up this register is set to 0 for all interface instances.

Error messages defined to date are.

This register is of limited use when the interface being used is not GPIB.

This register controls which bits of the Status byte register form the ist local message: If the result of bitwise ANDing The Status Bye Register with this register is zero then the value of ist is 0 otherwise it is 1.

All interfaces are live at all times; this removes the need to select the active interface and is also a LXI requirement. To reduce the risk of the instrument being inadvertently under the control of two interfaces at once a simple lock and release mechanism is provided in the instruction set. The lock is automatically released where it is possible to detect disconnection and when the local button is pressed. Access to the interfaces may also be limited using the web page.

Note: it is also possible to configure the maximum privileges for a particular interface to either ‘read only’ or ‘no access’ from the Web page interface.

There are 6 operating modes defined for the unit as listed in the following table. Of which 4 may be selected under digital remote control.

Note: Entry to modes 3 and 4 is only possible if both ontputs are switched off. On entry output 2 voltage range, voltage set point, current setpoint, OVP limit and OCP limit will be set to match the settings for output 1.

This section lists commands and queries implemented in this instrument. The commands are listed in alphabetical order within the function groups.

There are no dependent parameters, coupled parameters, overlapping commands, expression program data elements or compound command program headers; each command is completely executed before the next command is started.

All commands that send a reply are terminated with the remote message terminator (ASCII 0DH, 0AH carriage return, line feed).

All voltages are in volts and all currents are in amps. For ‘RATIO’ the figure is in percent

The maximum output voltage that can be requested is either 60V volts or 80V depending on the range selected; The minimum is 0V. The limits however may change when operationg in linked mode as for example if outputs are linked with V2 set to 200% of V1 then the allowable range for V1 is now 0 to 30 in low range as otherwise V2 would be set to an illegal value.

When operating in link mode the ratio between the two outputs can be 5% to 2000%.Changing the ratio changes V2. However, this is simlarly limited depending on what V1 is set to. If for example V1 were set to 10V and V2 is operating in the low range 60V. The range for ratio becomes 5 to 600 as otherwise V2 would be set to an illegal value.

The maximum output current that can be requested is either 50A; the minimum is 0.01A 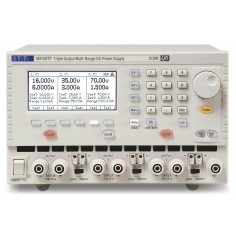 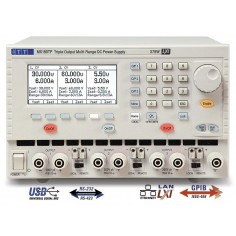